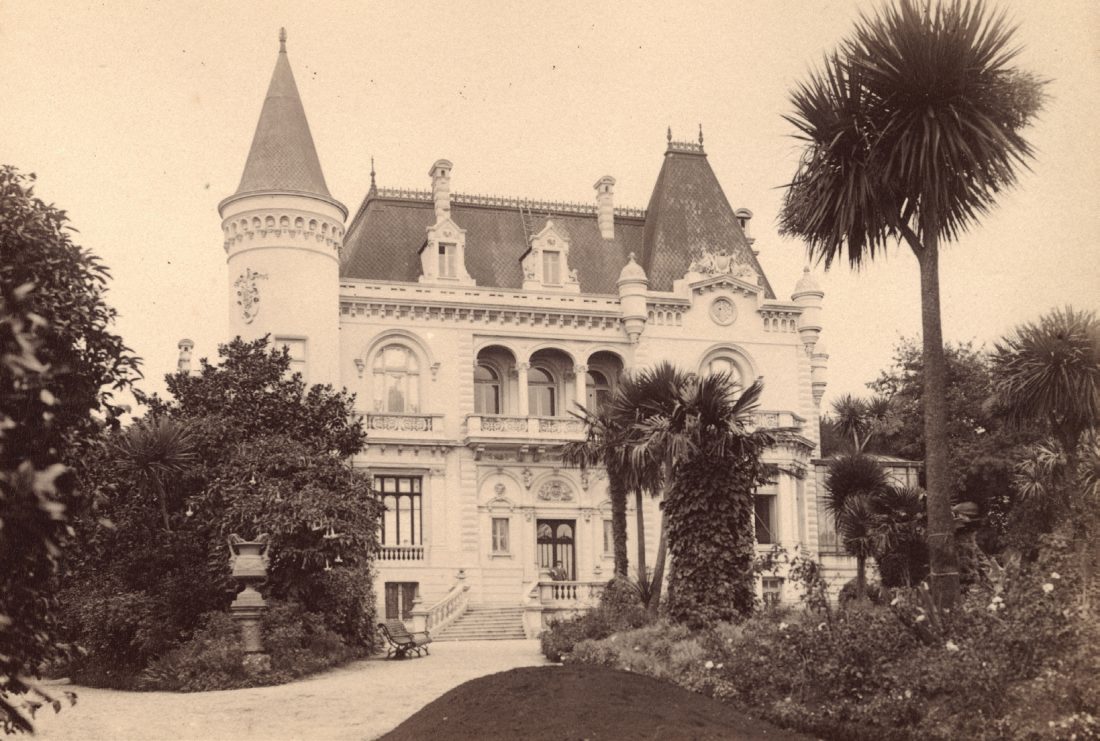 BEWITCHED, BESIEGED AND RESCUED PALACES: STORIES OF A PROGRAM OF CHILEAN ARCHITECTURE (III)

In this new issue of Professor Nordenflycht’s paper we focus on the evolution of the Chilean palace style and the various influences that led to the overcoming of the previous typology. This series will end with the next post that will conclude this tour through the Chilean palaces in between centuries.

If after a night and a day in Paris, as I have experienced, I would have returned to America, that young and lonely America, a pale reflection of European countries, I would have thought that I was walking from a dream, from a trip to another world, to another planet in which the beauties fascinating us and the ideas leading as were elaborated.

The impression of this Chilean in Paris surely represents the feeling of the elite he came from, being a homonymous child of the great historian and public man who, as Mayor of Santiago, introduced notable changes to its urban look. This opinion adds to the chronicles of the long transition from the 19th to the 20th century (2), in which everything that could be a model in Paris was finally betrayed by its copy in the sense that what was functional there was not so here. What was tradition there was eventually mere fiction here. (3)

This epochal mood given by literary impressions joins testimonies of another kind. thanks to which can approach this historical moment from its architectural works; photographic albums serve as an invaluable source of knowledge. The photographic album of José Walton (4) is an example of this eloquent example of this desire to narrate with images. In its pages, we can review records of the palace of Mrs. Carolina Iñiguez de Pereira, the palace of Eduardo Salas Undurraga, the palace of Moisés Errázuriz, the palace of Matías Astoreca Granja or the palace of Mrs. Lucía Subercaseaux  de Vicuña.  Each of the owners has been individualized exactly as it ensures that this diffusion “will increase the importance and the value of the properties”. The same utility can be found in the Álbum del Club de la Unión (5), published in 1925 on occasion of the inauguration of today´s Club de La Unión, a work by the architect Alberto Cruz Montt. These photographic repertoires, among others, allow us to know about the interior of notable buildings, which, added to the different testimonies of men and women, complement the social micro-history of the familiar relations of the elite residing in palaces amidst a complex transformation process. (6) Indeed, it seems as if the Latin American urbanization processes had increasingly less physical space for the elites, or that at least, these elites had to share them with the new inhabitants of the city coming from the villages. This palace model of a one-family home changed gradually under the demand of disciplinary demands, which in just a few years, were to find a vanishing point in such anathemas as the “machines for habitation”, in which the rationality of a plan was to be proportional to the functionality of a programme, compressing the habitability of a „minimal existence“, which would later even modify the lives of the hegemonic groups, those with the most power in society.

The amount of habitable square metres was reduced everywhere; dwelling in quantity was now becoming the watchword, and the former palaces gave way to smaller homes under the spur of rationality and formal economy, coming into conflict with the resistance of the elites. These groups were now searching for refuge in the programmatic declination of former palaces, those which the “Georgian” Anglo-Saxon architecture called bungalows and cottages. It is there where the colonial patios will give space to skylights, winter gardens, glass-covered patios and abbreviated domes.

In parallel, the town-planning model was also changing, from continuous façades and compact blocks,  stemming from the foundational Spanish chessboard, to “garden cities”, which in the case of Viña del Mar was to become an urban pleonasm. (7)

This consideration could not play down the effect of the representation of ideals, values and wishes of the project contracting parties still commissioning programs that showed a yearning for palaces in their most singular expression, but this leads us to contrast them with the original planimetrics and programmatic descriptions, especially in the face of the transformation of the buildings, in which the reduction of the number of rooms was the first sign of the beginning of their increasing obsolescence.

One effect of this was to be the important typological transition corresponding to the relationship between of full and empty spaces on the plot, whereas in the compact urban and high density groupings the outside is inside – the logic of the patio as a cortile – in the urban groupings with space the inside is outside the logic of the fore-garden – which, depending on their scale, could even have a perimeter park in Santiago, the palace status was gained in the occupation of complete pieces of land which, with their façade on the building line, left little space for more complex compositions, transferring this complexity to the ornament of the façade.

The palaces had a public vocation in the sense that reception and hospitality were among the laws of their program. They were programmatically conceived to receive visitors and not merely host the family, testimony of which is eloquently given by the height of the precincts and the configuration of their interior in an isolated building that favoured natural illumination. These proportions, dimensions and scale before the house, the mansion or the housing of the emerging classes at the turn of the 20th century are what was being left behind. The rites of sociability were ostensibly compressed in the domestic interiors. The house of the bourgeoisie was born, (8) which as we have already mentioned, was going to be built in a phase of transition towards the debate installed by the Architecture of the Modern Movement. (9) Architects like Smith Solar or Kulczewski were no longer to build palaces and the cottages, villas or chalets were making their first appearance, moreover sharing the physiognomy of the emerging city with local, vernacular contributions, generally linked to self- construction, which incidentally, were to extensively function as the spaces of habitability and sociability of the subaltern groups, those that were to be clearly relegated to what some people in those days called “anonymous architecture” (10) itself not exempt from typologies and values associated with the modernizing transfer of the European influence. One must remember that the collective housing typologies were called from now on “cités” , proving their French cultural origin even in the names of the most humble collective housings.

Heating, illumination, drainage and other several aspects more of what is generically known as networks were those that assumed a modernization model from within, in which power, gas sewage and even vertical circulation systems – like service lifts connecting the kitchen with the dining room – were now part of a material reality in which the most everyday aspects of the modernisation of Chilean society were being defined.

As the domestic spaces reduced their scale and size, the occupation of public spaces such as parks and avenues increased, and the consumption of food and beverages was no longer to be confined to taverns and canteens – mainly associated with the rites of masculine sociability – and whole families were going out to occupy restaurants, hotels and coffee shops. The latter were to become spaces of intellectual, political and social exchange, as was the unequalled case of Confitería Torres, which was inaugurated in 1879 and moved in 1904 from its central location on the crossing of Ahumada and Huérfanos Street to the premises of the first floor of Palacio Íñiguez. This paradox is reaffirmed by the fact that while the families of the former exclusive halls of the palaces closed their shutters and blinds, the doors and windows were opened by new owners, giving the palaces a new use, satisfying the demand for change of a modern society. (11)

In their origin, they generated value on the ground on which they had been erected; for this reason, their process of decline also meant in some cases the economic need to subdivide the rooms, meaning that our palaces became maisons à louer with leases and sub-leases, to the extent that very complex situation can be seen today in the area of La Alameda, where former palaces are directly reduced to slums on account of location promise opportunities, this being, perhaps, one of the values that coheres most with the expectations of urban ground speculation, in which the considerations of the heritage value are even seen as an obstacle for real estate development. In sum, these are besieged palaces in which disillusion is absolute. The same goes for all those palaces located outside the historical centres, especially all those spread over the national territory in privileged areas associated with the control of extractive activities, among which Palacio Cousiño and its Park in Lota –the town in Southern Chile where coal mining activity was developed– stand out. The loss of control of the mining industry, its transfer to the State and finally the closure of the activity have all yielded an economic context which inevitably explains the fate of the building, which is nowadays an enclosed wasteland in the heart of a park.

When Sigfried Giedion, from the seat of honour given him by his dominant history of the Modern Movement in architecture, reminds us that “once forms lose their internal content, they become clichés without any emotional meaning, but creative artists cannot use clichés. If the promoter wants clichés, then the eclectic set comes to the fore” (12), the coup de grace to historical eclecticism have already been struck with a hammer that, not merely a discourse, was to become an operational criterion, which was to be borne out by the heritage of our cities. This slippery confrontation between heritage and development was claiming victims, and these were not precisely the buildings and their upright materialities being reduced to ruins, but the future generations, which shall now have to evoke in the past tense what could have been part of their future.

(8) At a distance from the typologies represented by urban “private houses” or cottages, as has been observed by MIGNOT, Claude (1994): Architecture of the 19th Century. Köln: Taschen.