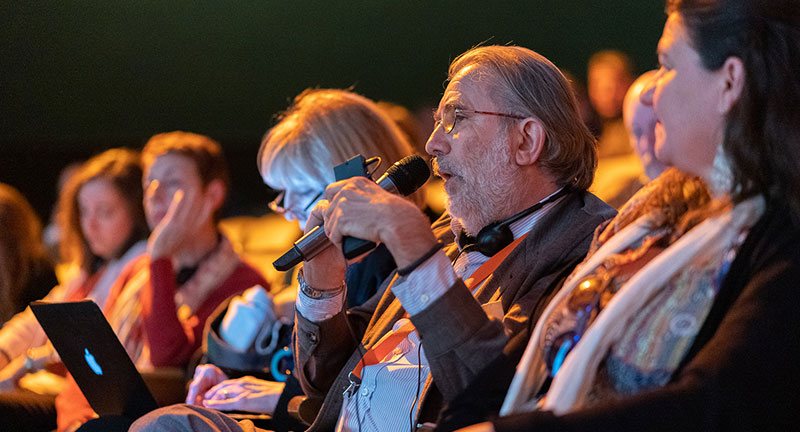 We continue the journey through the contents of the symposium with this fourth entry dedicated to its last day. In the closing thematic session, a debate was held on aspects related to current regulations, their shortcomings, proposals for improvement, new approaches and possibilities for development. In the same way, the responsibility of the Public Administrations and the involvement of the Business world were considered, focusing the question in the reflections on an optimal management of the patrimony.

The chairman of the table in this closing session was Alfonso Muñoz Cosme, Doctor Architect and professor at the School of Architecture of the Polytechnic University of Madrid. This day also saw the public reading of the Declaration of the Circle, named after the Symposium venue, the Círculo de Bellas Artes building in Madrid. We will dedicate its own space to this declaration in the following entry of this sequence of contents on the International Scientific Symposium on Security in Heritage.

Alfonso Muñoz Cosme holds a PhD in Architecture from the Polytechnic University of Valencia. He is a specialist in architectural heritage restoration, he has followed postgraduate studies in Munich and Madrid. Since 1988 he is a tenured lecturer at the Architectural Projects Department of the Polytechnic University of Madrid, and since 2009 he is an ANECA accredited professor. He has been Deputy Director-General for Information and Research at the Spanish Minister of Culture, ICCROM Council Member, Head of the Cervantes Institute in Munich and Rome, and Manager of the COAM Cultural Foundation. Until 2017 he headed the Spanish Cultural Heritage Institute which is responsible for the preparation and execution of heritage conservation and restoration plans, research on cultural asset criteria, methods and techniques. He has taken part in the following research and conservation projects Herakleopolis Magna (Egypt); Oxkintok (Mexico); Percorsi della memoria (Italy); La Blanca (Guatemala); Archivos de Arquitectura, Catálogo Monumental de España, Programa de Conservación Preventiva y Accesibilidad a la cueva de Altamira, and El dibujante ingeniero al servicio de la monarquía hispánica (Spain).

Challenges in Preserving Chicago’s Architectural and Cultural Environment of Buildings, Structures and Landscapes in the 21st Century_Ward Miller

Ward Miller studied architecture at the Illinois Institute of Technology in Chicago and also attended Northwestern University. For twenty years, Mr. Miller worked at Vinci-Hamp Architects, Inc. (formerly Office of John Vinci), where he was the Project Architect and Manager for restoration projects, including Holy Family Church, by architects Dillenberg & Zucker, John Van Osdel and John Huber, dating from 1857, The Episcopal Church of the Epiphany by architects, Burling & Whitehouse and the Heller House by Frank Lloyd Wright to name several and numerous temporary and permanent art installations at The Art Institute of Chicago and other museums. For over twenty-five years, Ward Miller has been an advocate for historic preservation and has been involved in campaigns to encourage restoration and reuse of many of Chicago’s historic buildings. He is now Executive Director of Preservation Chicago, a local not-for-profit historic preservation advocacy group, dedicated to protecting Chicago’s rich architectural heritage and legacy.

Pedro Salmerón holds a degree in architecture from the Superior Technical School of Architecture of Madrid and a PhD in architecture from the Polytechnic University of Valencia, with the doctoral thesis “Optimización de procedimientos científico-técnicos aplicados a la restauración del patrimonio cultural”. In the early years of his career, he combined his architectural practice with teaching. In 1987 and 1990 he was appointment as conservation architect of the cathedral complexes of Granada and Jaen. He played a major role as technical director of the First and Second General Plans for the Cultural Assets of Andalusia and as director of the Management Plans for the cathedrals under his charge, as well as for the Alhambra in Granada and the Alcazaba in Almeria. He is the co-director of the Andalusian Museums Archives and Quality Plans. Some of his interventions include the restoration projects of Alcázar Genil, or the refurbishment of the Hydraulic System and paving of the Patio de los Leones.

Tim Lynch is a New York State licensed Professional Engineer and certified Site Safety Manager with over 30 years of structural engineering design and construction experience. He is the Chief Engineer for the Enforcement Bureau for the City of New York’s Buildings Department where he has worked and served in a number of senior titles since 2005. The duties of the Chief Engineer involve building code development (currently they are on the complex NYC Existing Buildings Code), assisting with writing local laws and technical bulletins, inter-agency initiatives, engineering audits, training programs, overseeing our teams of engineers and inspectors, and outreach to our professional and contracting community regarding the current and prior codes governing the structural behavior of the New York City’s 1.1 millions existing buildings. Tim Lynch works on complex court cases, special assignments such as enforcement of legal actions, collapses, fires, building’s related fatalities and building damage resulting from large weather events, most recently evaluating essential facilities in hurricane damaged Puerto Rico.

Ana Tostões is PhD architect, architecture critic and historian, president of Docomomo International and Docomomo Journal. She is Full Professor at Técnico, University of Lisbon, where she teaches History and Theory of Architecture disciplines and coordinates the Architectonic Culture research group. Her research field is the Critical History and Theory of the twentieth century Architecture, focusing the relations between European, Asian, African and American cultures. In 2006, his Excellency the President of the Portuguese Republic distinguished her with the Commander degree of the Order of Infante Dom Henrique for her work on behalf of the Portuguese architecture and its international promotion.

Celestino García Braña has been professor of Architecture Theory, Introduction to Architecture and Composition at the ETS of Architecture of A Coruña (1981-2015), Director of the Department of Composition of the UDC (1993-2005), and continues his academic linkage as Honorary Professor. His didactic and research activity has led him to participate in numerous congresses and seminars in different countries, and he has given conferences and specialized courses in Germany, Argentina, Spain, Italy, Mexico, Portugal, Dominican Republic and USA. As an architect, his work has been recognised with numerous prizes and exhibitions, including the COAG Prize (1994), the Julio Galán Carvajal Prize (1997), Finalist of the Spanish National Architecture Prize (2005), and the European Rehabilitation Prize AADIPA (2015). He is author and co-author of numerous books and publications. He is a member of the registration committee of the DOCOMOMO INTERNACIONAL Brasilia (2000), Vice-president of the Fundación DOCOMOMO Ibérico since 2007, and Vice-president of the Real Academia de Bellas Artes de Galicia.

José María Ezquiaga holds a PhD in Architecture from the Higher Technical School of Architecture of the Polytechnic University of Madrid. His involvement in cities and urban projects dates back to the start of his professional career. In recent years he has focused his academic and professional interest on theoretical research into, and the project integration of, the various geographical and social scales of territories and cities. Currently, as an independent professional, he heads the firm Ezquiaga Arquitectura Sociedad y Territorio, he is the Dean of the Professional Architects’ Association of Madrid, Chairman of the Architecture Foundation, Deputy Chairman of the Inter-Professional Union of the Community of Madrid, and Chairman of the Spanish Association of Urban Planning Experts.

Closing of the Symposium