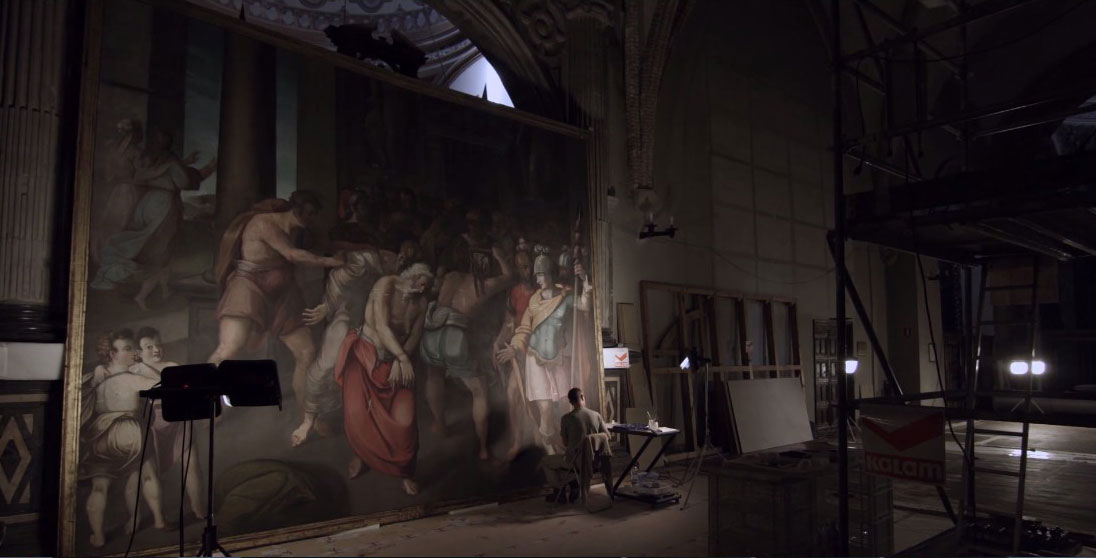 The spectacular doors of the altarpiece of the main altar of the Church of San Pablo have now been restored to their original condition.

The recovery project has been promoted by the Institute of Cultural Heritage of Spain, who has also been in charge of the restoration’s technical management.

The designers of these impressive doors from the sixteenth century were Antonio Galcerán and Jerónimo de Mora.  The technique used was oil paint on a canvas in the interior and tempered with glue without preparation for the grisaille on the outside.  Each panel is larger than nine metres by five metres.

Initially, the altarpiece could be fully closed.  Currently, only the main parts of the doors were conserved, having lost those corresponding to the bank and the attic, which no longer appear in the historical photos. When the doors came down, during the 1980s, the coloured canvases were divided by scenes and placed in different areas of the church.  The grisaille was improperly rolled and badly stored, being recovered and given to the church in 2005.

The Kalam team restored the grisaille, which was in very poor condition. The coloured canvases that had been placed in other areas around the church were restored.  The frames were rebuilt and the canvases reassembled to later be placed back in the doors.  The work was very delicate given their size.

The church of San Pablo is of cultural interest and is included on the list of monuments representative of the Mudejar architecture of Aragón, declared a World Heritage site by UNESCO.

At Kalam, we are happy to have contributed to the recovery of this magnificent asset that can now be appreciated by everyone.  Recovering its functions during Holy Week, when traditionally, and as some may remember, the doors to the altarpiece are closed, leaving the sombre grisailles exposed.