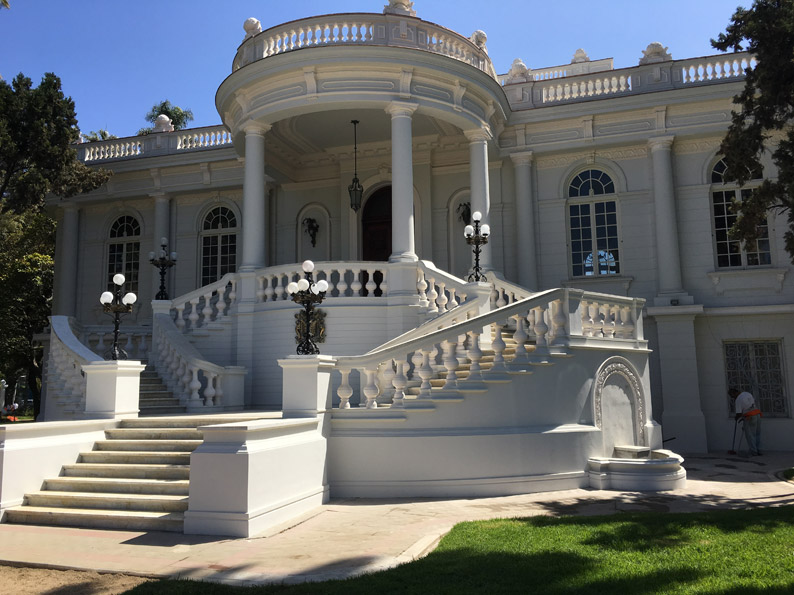 THE ORNAMENTAL RESTORATION OF THE RIOJA PALACE_1

In order to do things well, first, you need love: then, technique, (Antonio Gaudí)

In this entry, we describe you an important part of the intervention carried out for the recovery and enhancement of the Palacio Rioja de Villa del Mar, in Chile, developed by the professionals of Kalam. The article, written by Javier Latorre Zubiri, member of Kalam’s team who was in charge of the work, focuses on the restoration of the objects and elements of the historical and artistic value of the building. This text, together with other contributions from relevant Chilean heritage professionals, was included in the book “Enhancement of the Heritage. Palacio Rioja, a recovery experience in Ibero-America”  published by Kalam as part of his collection of books on Ibero-American heritage. We will give you a selection of these interesting contributions in a set of entries, which we hope you will enjoy reading.

The spirit with which we have performed the restorations work of this valuable and beautiful palace, both from an architectural viewpoint and that of ornamental decoration, has been presided by the maximum respect for the constructed work based on the understanding that the traditional techniques and the complement that scientific restoration can contribute at the moment of the intervention.

Among the tasks performed for the recovery of this singular building, mention may be made of the restoration of the whole set of ornamental architectural elements, both exterior and interior, which contributed to beautify and enrich its gardens, façades, walls and ceilings, and which, with this intervention, have recovered their physiognomy and original splendour. The architect in charge of the design not only took into account the creation of habitable space but also thought of extolling the opulence and class of their owners by means of ornamental delight.

This article will focus on those objects and models contributing an artistic complement to elevate the category of the building and its surroundings.

We are going through a historical time of deep social and economic changes to which Chile, along with the then-emerging coastal town, is no stranger and which affect architecture and other fine arts. So much so that the importance of master craftsmen, elevated in some instances to the category of artists, accompanies the work of architects, painters and sculptors, leaving their mark on plasterwork, carpentry, locks or furniture. Palacio Rioja is a clear example of this. 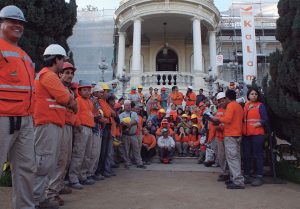 For this task, we have contacted a large group of technicians and specialists, trained in the restoration of heritage buildings, coordinated by experienced professionals who have been in charge of supervising and instructing the teams distributed in the different areas and who have worked with different materials: wood, gilding, marble, gypsum and stucco. It is on the noble floor of the palace and its perimeter façades, in addition to some elements located in the garden, such as the fountain located in front of the main access and the lanterns illuminating its surroundings, where the most delicate and particular tasks were concentrated. The infrastructure needed to perform our tasks, including the carpentry, moulding and restoration workshops, was established in situ. 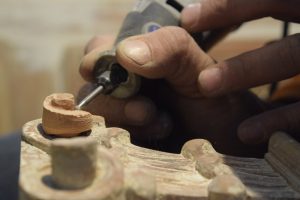 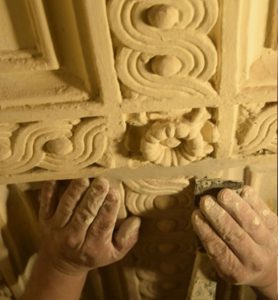 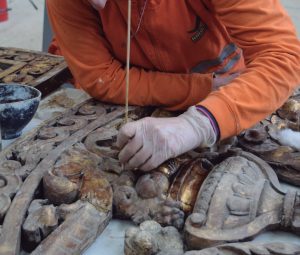 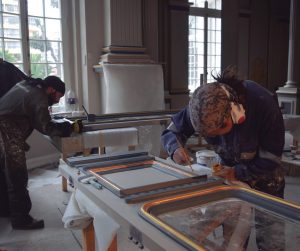 Whether we work at an architectural or an ornamental level, a deep knowledge of the materials with regard to their look and internal or structural preservation status is essential as a first step for applying the most suitable treatments in accordance with each case. This is how the best decisions on the preservation or the restoration of this kind of decorative elements can be taken; most of them are inserted in the construction, forming a whole in the building design. This is how we may find mouldings, balusters, figurative or vegetal sculptural elements of greater or lesser complexity, in addition to carved wood and pieces of noble carpentry, even decorative floors made of different kinds of wood forming complex lattices. 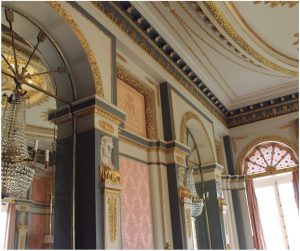 Photo 6. The final state in different rooms and walls after the interventions carried out.

We must bear in mind the importance of the finishes during the restoring process, as they represent the visible skin of the building, reflecting its true spirit and the intention of the developer to show his actual economic and social position. For this reason, it is important to respect the original design, including the choice of colour – backed by a rigorous study of samples which made it possible to identify the original colour scheme -, along with the recovery of other kinds of coverings, such as textiles, gildings, glassware, fences or lamps. 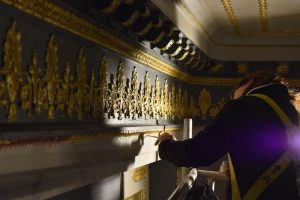 Photo 7. Paintbrush reintegration of the gilding after the chromatic study carried out.

In consequence, and being aware that our task has to adhere to the stipulations of the tender, we have devised restoring solutions which contribute to maintaining the authenticity and originality of the building, enhancing the values acquired in its design and planning, without incurring in false historic assumptions that detract from its architectural and artistic image. However, when it comes to restoring a palace-like Palacio Rioja, we cannot forget that the preservation of the building and its original elements have to harmonise with its functions as a museum, the latter being subject to the former but without abandoning its status as a living legacy, which favours its preservation and maintenance. 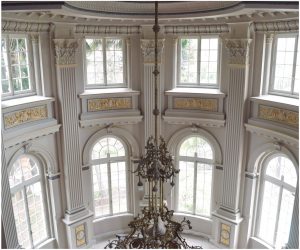 Photo 8. The final state in different rooms and walls after the interventions carried out.

The most obvious damage to the palace had less to do with poor use or a transformation of the building’s original structures than with the destructive effects of the recurring earthquakes in the region – in this specific case, resulting from the last high-intensity seism, which happened on 27 February 2010 and seriously damaged the building. Its structural framework, designed by the French architect Alfredo Azancot to react with some flexibility to the repeated earthquakes of this geographic area (let us remember that in 1985 it was severely affected, requiring a deep intervention led by the architect Patricio Peralta- did not prevent that coverings and decorations from being severely affected and intensely destroyed once again. The inclusion, during the last intervention, of materials with different behaviour from those used in the original construction has also been important for the response of the structure to the last earthquake; but these actions are always conditioned by the effects this produces. Detached plasters, cracked and fractured ornamental pieces, volume losses and moulding line interruptions and carpentry work altered and weakened due to the overlapping of paint layers and inappropriate repairs were especially visible before we began our work. 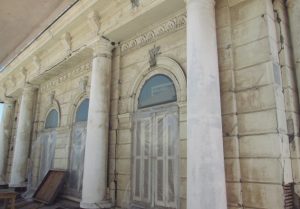 Photo 9. View of the external façade of the central lobby, with an accumulation of pathologies.

Each earthquake has affected the palace in a different way, as its behaviour depends on various factors, such as the magnitude and speed of its movement, the energy released, the characteristics of the soil and the vulnerability of the construction. The seismic load supported by the structure of the building invariably causes a domino effect on the whole architecture of the palace, regardless of its intensity, linking another series of important consequences affecting the architecture of the building to a greater or lesser extent, and in turn, the covering and ornaments. While the building did not totally collapse – even if severe problems were caused in certain non-structural parts – the general status of the palace made it uninhabitable, requiring an urgent assessment of the damages and the right decisions in order to alleviate the problem, this necessary circumstance being taken as an opportunity to undertake a comprehensive restoration and updating of its museum facilities, enhancing its aesthetical and artistic qualities, but without forgetting its initial conception as residential housing. As a consequence of the damages caused by a strong earthquake – which happened on the converging edge of the Nazca and South American tectonic plates with a magnitude of 8.3 Mw-, the tightness of the architectonic container (indoor and outdoor facings) was seriously affected, triggering a series of side effects which worsened the already existing problems and, in the process, the weakness and progressive deterioration of the internal and external decoration motifs. The sculptural pieces and mouldings not only cracked but also became detached due to the loss of material consistency caused by the weakening of the assembly and attachment to the structure. The ornamental elements and finishes are inevitable victims in such cases as it is logical that certain materials, such as gypsum and concrete, should crack in reaction to the traction tensions generated during the seism. 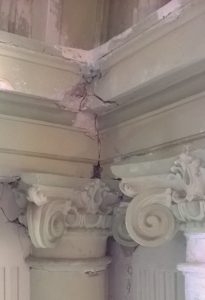 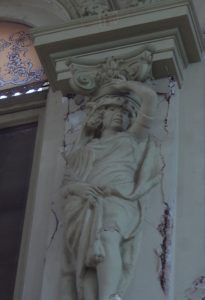 Photos 10 and 11. Cracks and seismic movement in some fragile areas of the architecture, more intensively visible in the corners and central parts of the main lobby.

As a consequence, rainwater filtrations and capillarity moisture caused collateral damages that likewise affected the various ornamental materials. Such processes included, in a significant way, what is known as “bio-deterioration”, a stealthy and dangerous enemy that generated fungal infestation in some of the wood, quite rapidly undermining (it is estimated that fungal infestation can reduce the mechanical capacity of wood by 40% in just a few months) the resistance of the support frame (structural framework and splinting), as was most obvious in such important rooms as the Louis XV Hall, the dining room or the orchestra tribune, negatively affecting the decoration embellishing walls and ceilings. This effect could be occasionally seen on some parquet floors, accompanied by subsequent material losses of the small tablets the parquet and baseboard were composed of, especially in the corners most likely to allow water in. To a slightly lesser extent, among the conditions caused by pathogens and in some occasions in the same areas as the fungal infestation, we found traces left by now-inactive xylophages, which, from the size and shape of the holes and the characteristics of the galleries, we were able to identify as belonging to the woodworm and lyctid families. 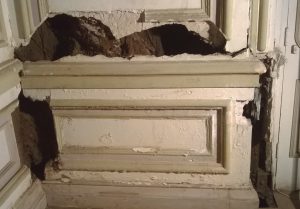 Photos 12 and 13. Preservation status of the structural support and coverings with physical degradation and volume loss.

Just as moisture acted upon the wood, so it did on the gypsum and the cement stucco, stimulating the appearance of salt efflorescences, as shown on the exterior of coats, generating the appearance of stains and cracks on wall surfaces. The crypto-efflorescence effect caused by the re-crystallization of salt in the interior of pores – which during their expansion disaggregate the material exposed to moisture and environmental changes – caused the loss of cohesion and the stripping-off of coverings and mortars, which in many cases became eventually detached. 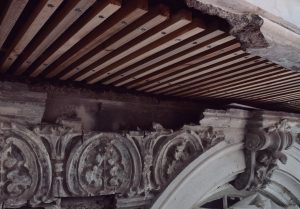 We cannot forget other damages of anthropogenic origin resulting from human activity and caused by the different interior restoring interventions that took place over time: aesthetic remodellings, changes of use, the addition of new materials, etc. The repairs performed, not always successfully, sometimes concealed other problems, aggravating the situation due to delayed decision- making: from wallpapers to plastering and the superimposition of paint layers which changed the original colour of the different noble rooms, spoiling the decorative richness recovered after the intervention. This list must also include environmental degradation, as the dirt deposits and pollution resulting from the emissions of the area’s intense traffic also cause variations of the physical-chemical properties of the materials, accelerating the degradation proves and a reduction of its resistance, stability and morphology properties.

In sum, it can be said that the problems and alteration factors found with regard to the ornamental apparatus represent the transfer to the outer skin of problems existing in “the internal organs” of the building, the two inevitably being closely related. Since the main structure is made of flexible wood, the worst damage to the decoration was located in the upper areas of the palace, which are less well-connected and with more openings for illumination purposes; the main lobby and the dining room were the most affected areas.