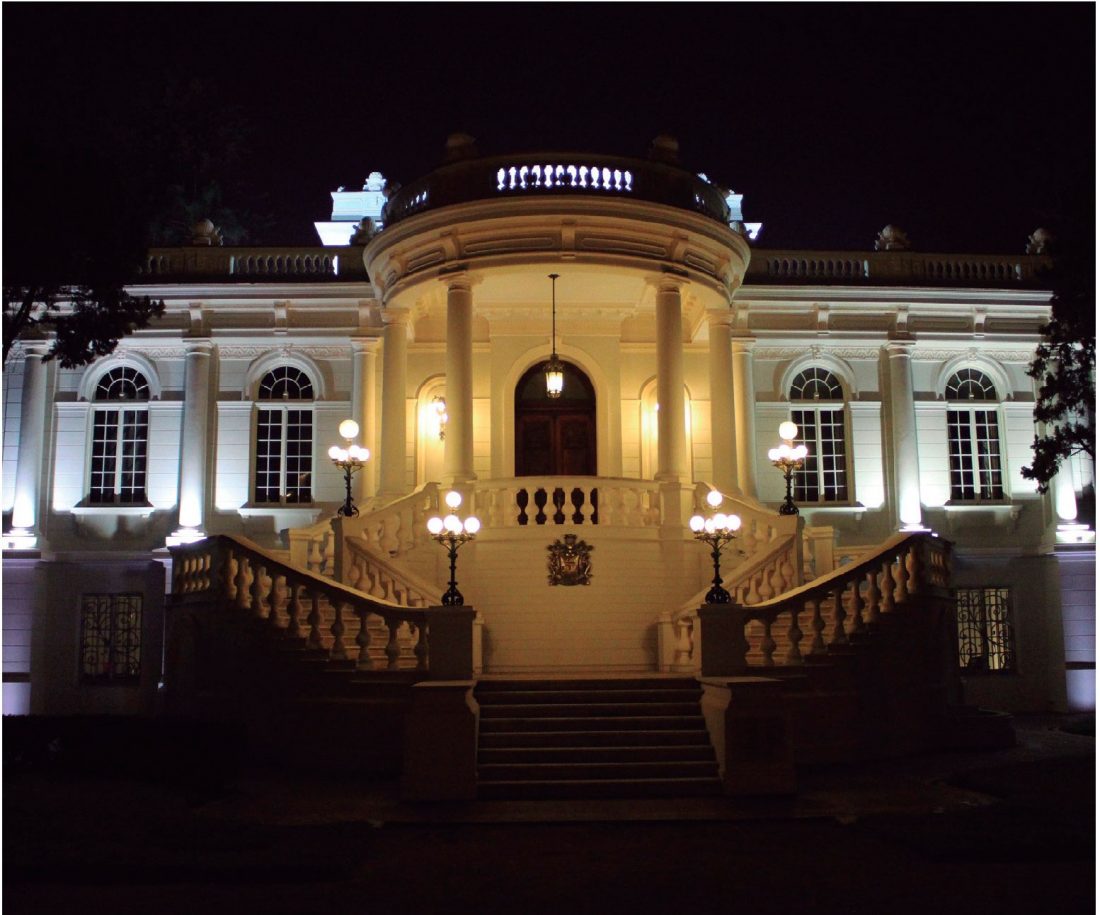 THE ORNAMENTAL RESTORATION OF THE RIOJA PALACE_2

In this second entry we continue with the article written by Javier Latorre Zubiri that shows the intervention carried out for the recovery and enhancement of the Palacio Rioja de Villa del Mar, in Chile, developed by the professionals of Kalam.

In this occasion we show you a brief summary of the interventions carried out on the decorative sets and ornamental pieces, as well as the different techniques used during the restorations. As we indicated in the first entry, this text, along with other contributions from relevant professionals of Chilean heritage, was collected in the book “Enhancement of the Heritage. Palacio Rioja, a recovery experience in Ibero-America”  published by Kalam within the framework of its collection of books on Ibero-American heritage.

Outside the palace, the dominant notes are sobriety, order and perfection of ornament – configured by smooth shaft columns, balustrades on the stair and coronation and even vases surmounting the facades -, taking into account the rupture the architecture is subject to in relation to the baroque style, which is less evident in the halls and interior rooms, where we find a more profuse decorative versatility and richness. If principles of grand siècle French classicism are expressed more clearly in the façade lines, reflecting this style’s restraint and moderation, in the interior, as happens with inspired France, this moderation is less ostensible, since the architectural design of columns, pilasters and cornices is complemented with friezes, lintels, frames and a rich three-dimensional plaster ornamentation also found in the wall textiles, a few elements carved in golden wood – like the pieces enhancing the arches inside the dining room
-, and to a lesser extent, the magnificent chiselled bronze and gold elements found on sconces, lamps, doorknobs, etc. 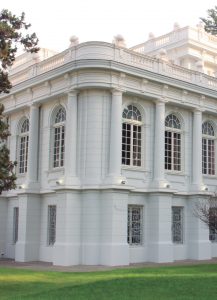 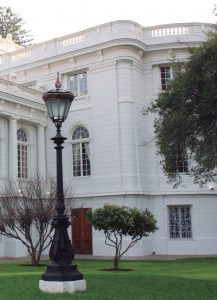 The creation and manufacturing process of the ornamental motifs (vases, masks, medallions, etc.) both on the façade and in the interior requires different techniques, including formwork, continuous moulds or wood carving and traditional gilding, all of them present in the decorative apparatus adorning the palace. In the case of the serial sculptural pieces, it is precisely thanks to the mould that one can reproduce with no loss of quality in the shapes, provided one knows the modelling and emptying techniques of this creative activity. Its articulated and fragmentary nature allows the harmonious combination of these elements, making it possible to incorporate different techniques within the same architectonic plan, with the purpose of visually enriching a façade or a hall.

Photos 2 and 3. Various phases of the finishing and recovery of the palace’s original colour scheme.

The consolidation and fixing the elements preserved also requires the replacement of lost or fragmented pieces, duly reproduced with the same techniques used in their elaboration, on the basis of existing elements used as a model. This has allowed us to comply with the objectives set before we started the task, which included an intervention aimed at resolving the stability of fragile decorations and mouldings at risk of detachment and allowing the continuity of the material losses with the purpose of conserving as many original pieces as possible, using the reproduction of those missing as a last resource. 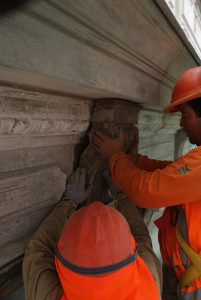 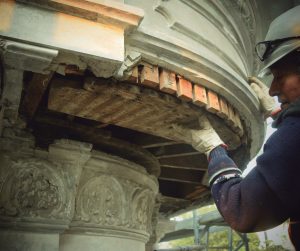 Photo 4 (left). Disassembly and assembly of damaged parts. Photo 5 (rigth). Reintegration of the wooden structural nucleus that gives shape to the cornices.

Friezes, corbels, mouldings and ornaments at risk of detachment were removed from the walls to ensure the fixing onto the bearing slats, which were themselves weakened and with minimal bearing capacity. Given the weight of these pieces of sculptural volume, there were severe detachment risks, which entails a multiple fragmentation that makes their preservation more difficult. This led to partial removals in order to recompose the material stratification of the supporting wall and replace the pieces once cleaned, consolidated, reinforced and made firm with new anchors and fixings, according to the procedure established in the technical specifications.

The reproduction of the missing pieces was performed in the workshop installed in the exterior of the palace, in front of the main façade. It was in that workshop that matrixes in polyester resin, silicone or latex were elaborated, depending on the nature of the shape (relief or round piece), the complexity and necessary amount of the element to be replicated, always taking into account the materiality of the copy, the retention points and the quality required. Single- sided moulds were made for reasons of low relief pieces (serial elements of façades, freezes and small corbels) while for balusters, vases and other singular elements of greater complexity, moulds for parts were used. Likewise, when replicating the missing elements and in order to choose the loading material, we took into account the necessary plasticity for moulding, as well as their location, weight and structural stability, also viewing the anchoring conditions and installation order from a manufacturing point of view. 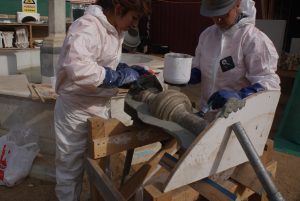 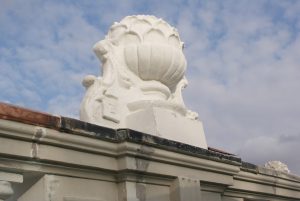 Photos 11 and 12. Moulds and reproductions of large pieces elaborated at the on-site workshop.

In the case of continuous elements, like cornices, imposts or pilaster shafts, we began manufacturing the metallic diestocks with which to reproduce and repair these elements. With a moulds profiling tool, the shape is identified and the silhouette transferred to a piece of metal reproducing the shape of the counterblock. Once the profile has been strengthened, the installation of a wooden frame allows us to go through the screed of the missing areas and losses in the architectural lines, eliminating the existing surplus material until it is at the same level as the existing material and working on the gypsum or concrete mass when it has hardened enough to maintain its stability without deformations. 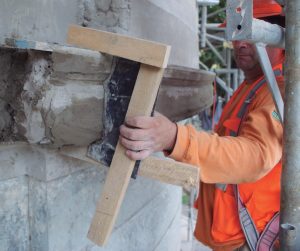 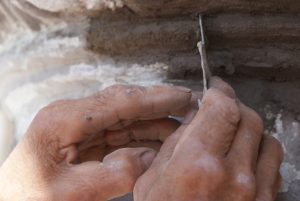 Photos 12 and 13. Elaboration of continuous mouldings by means of manual moulds.

The finishing process of façade facings and surfaces, interior walls and ceilings – once the processes involving structural consolidation, repair of cracks, restoration of plasters and decorative elements had been completed and the installations (electrical, sanitary, heating, etc.) had been renovated – was based on an exhaustive prior study of the colours and plastic characteristics the palace had in its origins, with the aim of remaining faithful to the idea expressed at the time of its construction and decoration. The mordant gildings enhancing some parts of the architecture were retained following a stripping of the different paint layers applied over the years, subsequently reintegrating the missing parts and applying new gildings with acrylic resin aggregated iriodin, using a brush on a material similar to the original gilding. To paint the indoor enclosures, we used a high-quality water-based varnish in accordance with the colour codes determined in the prior sampling, whereas outdoors, due to their water-repellent and steam permeability qualities, we used a silicate dispersion mineral paint. Thanks to these works, the palace maintains the validity and reputation of an era preserving its own identity. 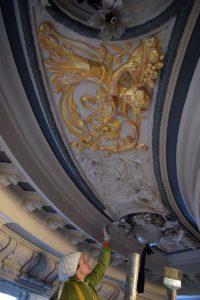 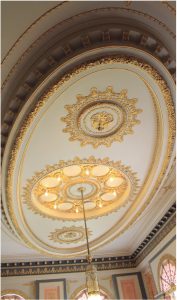 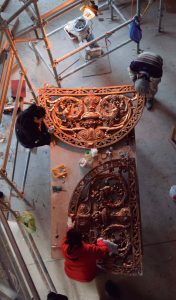 4. Treatments of joinery and wooden floors

As becomes palpable in architectural coatings and the ornaments of facings, ceilings and façades, among the prevailing tastes and desires of the promoters of the palace, what prevailed were the influences that had been developed in the world of joinery and carpentry since the publication in Paris between 1769 and 1779 of L’Art du Menuisier, a work by the French specialist André Ja- cob Roubo which constitutes a genuine treaty on the manufacturing of furni- ture and other timber elements in architecture, such as floors and doors. This work, in the Age of Enlightenment, joined other writings, treatises and ency- clopaedias published in a fundamental period for the development of Arts and Science, enjoying much dissemination and effect in later centuries as can be seen in Palacio Rioja, where the predominance of French style and fashion, as mentioned several times above, is reflected in the architecture and decorative arts, the palace interior combining gypsum works with carved and moulded wood, unitarily complementing each other. In this work, André Roubo deve- lops the technical expertise of the art of carpentry to its fullest extent, cove- ring furniture, doors and windows as well as parquets, in addition to lambris and boiseries, among other disciplines related to working with and manipulating timber. We can find references of all these tasks in the wood present in the pa- lace, in the construction style and the design of the pieces, which in accordan- ce with the prevalence and teaching of the master are divided in non-movable (decks, friezes, ceilings, etc.) and mobile elements (doors, windows, blinds or shutters), and which we can appreciate here on the second floor pavements – from the beautiful composition of the small parquet in the vestibule to the parquet of the main halls – certainly of undeniable compositional richness, or the main access doors and those leading to the different rooms according to their rank, both those in natural timber and those painted. 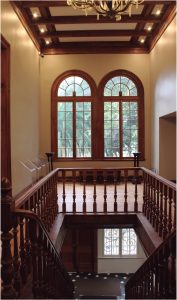 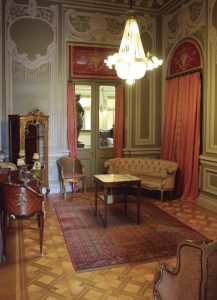 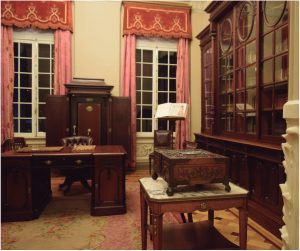 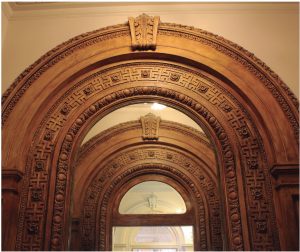 Stylistically, we can see wooden elements that are an important part of the interior architecture, such as doors, windows and shutters, interiors stairs with their banisters and beautiful parquets, elaborated in different timber varieties (mainly Rauli beech) and shades, forming drawings based on fractal geometries of different complexities and following different patterns, depending on the importance of the hall.

Most of the movable joinery, painted with successive layers throughout time, had become dull and deformed in its morphology. It was necessary to remove the accumulation of paint layers and restore and treat the wood, as some pieces were affected by biological contamination, the formation of fungi or xylophagous insects. Once the surface paint layers had been stripped off by mechanical and chemical means, the remains, which were more tightly adhered, were removed by means of fine steel wool with the help of small quantities of solvents which we evaporated before proceeding to apply the definitive paint layer preparation and layer.

The timber floors were protected during the works and finally cleaned with a slow-rotating machine, in order to prevent an excess of timber wearing from abrasion. In the interests of a achieving a regular surface, a mechanical grinding accompanied by a smooth sanding with an abrasive system was performed in order to eliminate the difference in height of the pavement pieces; the floor surfaces eventually became appropriately smooth and polished, ready to receive the finish following the cleaning of the surface with a dry cloth. Two layers of a blend of waxes and vegetal oils were applied; this blend penetrated the timber, hydrating and protecting it against moisture and dirt. At present, the floors show the traces of time, but are ready for future maintenance and preservation. 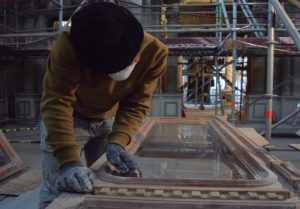 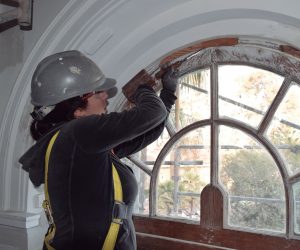 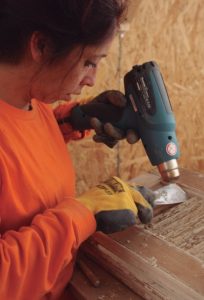 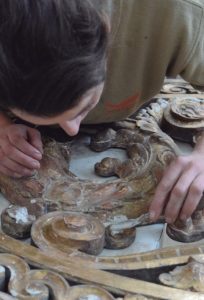 We have explained in this chapter the most visible details of the building´s emblazonment, although these tasks have not been the only ones, as the decorative richness is abundant and varied: glassware, bronze pieces, textiles and furniture are an essential complement for one to appreciate the sumptuousness and opulence demanded by the owners of the palace, who spared no expenses.

Finally, we would like to remember the primary work entailed by applying the maintenance programs for the conservation of historic buildings; and in the particular case of Chile, a country regarded as being of high vulnerability due to its seismic activity, the stabilization of the architectural structures with updated solutions and norms adapted to the latest studies on this subject, which incorporate dynamic control measures allowing us to determine the behaviour of these formidable and noble residences during unpredictable events of this kind. A detailed preventive maintenance and conservation program is essential to ensure that this important legacy, of which Palacio Rioja is a notable example, can be enjoyed by future generations. 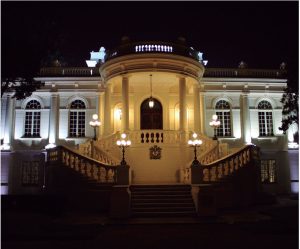 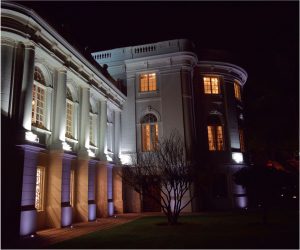 Photos 23 and 24. Works of illumination of facades of the Palace and exterior areas.