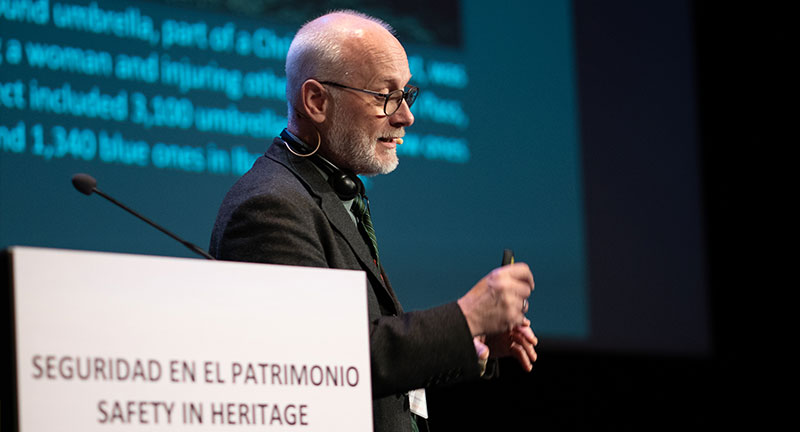 In this third publication you can find the videos of the lectures given during the second day of the symposium along with the closing debate on the theme of this session.

Thematic day two analyzes the most frequent risks generated in cultural heritage and its causes, as well as innovative solutions, both in construction as well as relative to the management of the asset, to improve safety for heritage, its users, and visitors. Success cases, good practices, technological advances, construction proposals, etc. were presented, exemplifying the best practice in this area. Fernando Espinosa de los Monteros, from EMA Espinosa de los Monteros y Arquitectos, chaired the thematic session during this day.

Fernando Espinosa de los Monteros. Since 1983, he has directed his own architecture studio, with a large team of young professionals of different nationalities and multidisciplinary work teams. He has participated in numerous projects and competitions across Spain, the EU, America and the Middle East. He is especially involved in the protection, conservation and recovery of architectural and cultural heritage, as a founding member of ISC20C – ICOMOS (the ICOMOS Twentieth Century Heritage International Scientific Committee) and chairman of AEPPAS20 – Spanish Association for the Protection of Twentieth Century Architectural Heritage. Recently, in 2011, he promoted, through ISC20C and AEPPAS20, the drafting and signing of the Madrid Document, the first doctrinal document laying down the intervention criteria for 20th century architectural heritage.

The Safety and the architectural Project_Gabriel Ruiz Cabrero

Gabriel Ruiz Cabrero. Graduated in Architecture from Madrid’s Technical School of Architecture (ETSAM) in 1971. He was named Emeritus Professor of Architectural Projects of the Polytechnic University of Madrid (UPM) in 1995. He has been head of the Department of Architectural Projects of the ETSAM and guest lecturer at various universities: Harvard, Columbia, Glasgow, Milan, Venice, RISDI. He was Head of the “Nuevas Técnicas Arquitectura Ciudad (NuTAC)” research group at the UPM, up to 2016. He received the “Ciudades patrimonio de la humanidad” National Award in 2010. His major works include the Headquarters of the Western Andalusia Professional Architects’ Association, the Restoration of the Mosque-Cathedral of Córdoba, the Community Social and Civic Centre and Sports Centre on Antonio Machado Street in Madrid, the Restoration of the Collegiate Church in Santillana del Mar or the Restoration of the Las Bernardas Convent in Alcalá de Henares.

From Trinity Church to the Temples of Angkor: Safety in Cultural Heritage_ Glenn Boornazian

Mohamed Es-Semmar. Director of Cultural and Archaeological Heritage at the Agence pour l’Aménagement de la Vallée du Bouregreg since 2011, holds a Degree in History and a PhD in Islamic Archaeology from La Sorbonne University. He is the author of a great number of articles, documentaries and interviews to national and international TV channels about the history and archaeology of the City of Rabat. He has taken part in numerous international symposiums and read papers on heritage, culture and archaeology. Among other works he directed the archaeological excavations at the Ribat Tachfine site, beside the Kasbah of the Oudayas, in Rabat.

Antonie M. Wilmering. He is a senior program officer at the Getty Foundation and oversees grant initiatives related to the conservation of cultural heritage around the world. His portfolio includes Keeping It Modern, and international grant initiative aimed at advancing the care and conservation of 20th century architecture. Wilmering received his training as a conservator of wooden objects in the Netherlands and in the UK, and prior to joining the Getty in 2004, he taught conservation at the Graduate Institute of Conservation of Cultural Relics at the Tainan National University of the Arts in Taiwan (2000-2004) and was a conservator at the Metropolitan Museum of Art (1987-2000).

Bob Combs has been with the Getty since 1986. He served for a number of years as Manager of Technical Systems and was responsible for the design and implementation of security and fire safety systems at the Getty Center and the Getty Villa In 2000, he was promoted to Director of Security for The J. Paul Getty Trust and in 2011 added responsibility for the Visitor Services Department. He Manages a staff of several hundred professionals. He is responsible for security, technical systems, transportation, visitor services, call center, ticketing and parking operations. Combs also previously served as Associate Director of Security at the Art Institute of Chicago, from 1979 through 1986. He holds a Bachelor of Science degree in Management from the University of Redlands, and a Master in Business Administration (MBA) from the Anderson School at University of California Los Angeles (UCLA).

The Giralda of Seville: conservation and safety of its heritage_Eduardo Martínez Moya  and Jaime Navarro Casas

Eduardo Martínez Moya is an architect from the University of Seville and teaches at the School of Architecture of the University of Seville from 1991 to the present day. He is the founder and Director of Edartec Consultores (EC), an architecture and engineering which is a specialist in design engineering, calculation and control of foundations and structures, issuing reports-expert opinion on construction pathologies and structural projects, reinforcements, underpinnings, rehabilitations and intervention in heritage and monumental buildings such as: Puerta de Sevilla de Carmona (Punic); Vía Augusta, Puente de los Cinco Ojos Carmona, Teatro Romano de Itálica, Casa de Cultura Lebrija, Biblioteca Colombina, Sacristía del Sagrario and the  Royal Cathedral Chapel of Seville, Giralda de Sevilla (Islamic-Almohad); Castillo Constantina, Castillo Pruna, Castillo Trebujena (Mudejar-Medieval); Royal Cathedral Chapel of Seville (Renaissance); Palace Marqueses de la Algaba, Puerta de la Carne Market of Seville (rationalism) or the Giralda, among others.

Safety in the Renaissance façade of the University of Alcalá, Asset of Cultural Interest_Juan Manual Vega and Fernando da Casa

Juan Manuel Vega is Technical Architect, Building Engineer and he also holds a Master in Restoration and Rehabilitation of Heritage and a Master in Integral Management of Buildings and Services in Architectural Heritage. He is a specialist in building pathology, diagnosis, technical valuations, intervention in building, and especially in the field of restoration, management and preventive conservation of immovable cultural property. He has also been an Associate Professor at the School of Architecture of the University of Alcalá and he is a member of the Research Group “Intervention in Heritage and Sustainable Architecture”. He has combined his teaching work with professional practice, as a Technician of the Office of Infrastructure Management and Maintenance of the University of Alcalá, from which he has directed numerous interventions, including: the Rehabilitation of the old Cuartel del Príncipe for Resource Centre for Learning and Research (CRAI), or the recent Restoration of the Renaissance Façade of the Colegio Mayor de San Ildefonso.

Fernando da Casa is an Architect since 1991 and PhD. Architect since 2000, by the Technical University of Madrid. He is member of the Research Group of the UAH “Intervention in Heritage and Sustainable Architecture”, of which he was the first coordinator and Spanish representative in the Commission 16 – UNESCO World Heritage. As a professional and manager of the University of Alcalá, it stands out the concession as the Prize Hispania Nostra to good practices in the conservation of Cultural Heritage, in the category of Conservation of Heritage as factor of economic and social development, the Medal of Honour of the Royal Academy of San Fernando to the University of Alcalá for its work in the protection and conservation of Heritage, more recently, it is worth highlighting the European Union Prize for Cultural Heritage / Europa Nostra Awards in 2018, and the special Prize of the Foundation of Historical and Singular Houses for the management carried out in the restoration of the Renaissance façade of the Colegio de San Ildefonso, the current rectorate of the University.

Zoheir Mottaki is Architect, Urban Designer and Community Facilitator. PhD. Architect from the University of Tokyo since 2015 with a thesis on collective housing, a comparative study in Iran and Japan, which led him to research on post-disaster reconstruction and recovery. He completed his bachelor’s and master’s degrees in Architecture and Urbanism at Yazd University in Central Iran. He collaborated with the Research Institute of Cultural Heritage and Tourism office in Yazd (2005-2008), where he developed several publications. He holds a degree in Psychology, and attended renowned academic institutions as a postgraduate exchange researcher (Polytechnic di Milano, UC Berkeley and the Australian National University). Since 2015 he is assistant professor at Shahid Beheshti University in Iran, in the Department of Disaster Studies and Reconstruction of the Faculty of Architecture and Urbanism. He began a career in humanitarian architecture as a volunteer and NPO member on rural reconstruction of South Kerman Province. He is Director of SBU’s Urban Reconstruction and Resilience Studio. He has extensively lectured in Iran on DRR and DRM, as well as Risk-Aware Design and Management methods.

Safety in the rehabilitation of structures in Madrid _Enrique Nuere

Enrique Nuere is an Architect from the Superior Technical School of Architecture of Madrid (1962) and PhD. Architect from the Technical University of Madrid (1967). He’s an undisputed expert in the field of historic carpentry, standing out for his written work, in which he recovered and deciphered the manuscripts of  Diego López de Arenas and Fray Andres de San Miguel. In relation to this activity it has obtained many prizes such as: Rafael Manzano International Prize for Classical Architecture and Monumental Restoration in 2016. He also belongs to several prestigious institutions such as Academician of the Royal Academy of Fine Arts of San Fernando, (Madrid), Corresponding Academician of the Academy of San Telmo, (Malaga), Corresponding Academician of the Royal Academy of San Miguel Arcángel, (Santa Cruz de Tenerife), Member of the Board of Trustees of the Alhambra and Generalife (1986-1995) or Chairman of the Subcommittee on Standardisation of Structures (SC 6 Wood Structures of the CTN 56 Wood).Somo of his works including the recovery of the coffered ceilings of the National Museum of Hispano-Muslim Art in the Alhambra, the coffered ceilings of the Auditorium of the University of Alcalá de Henares, of the Ducal Palace of Pastrana, or the Villalón Palace in Malaga, now the Thyssen Museum.