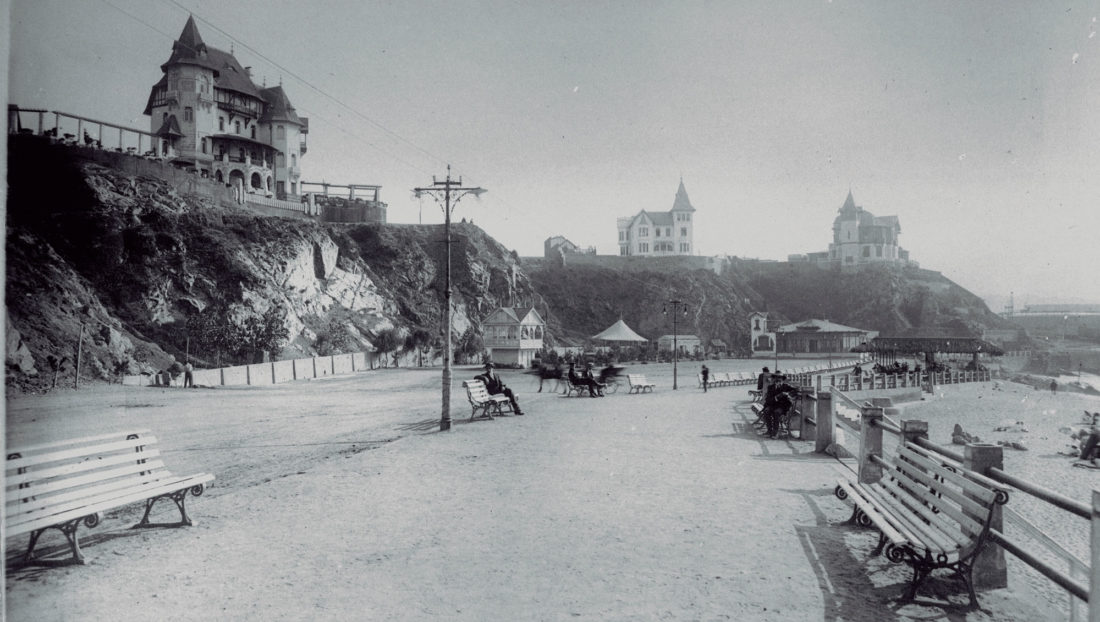 Towards an approximation of the place

In this new issue of specialized articles we want to expand the perspective and treat from a landscape and urban point of view of one of the exceptional cities in which we are fortunate to undertake many works of our office in Chile: Viña del Mar. Through the text by Jocelyn Tillería González and Fernando Vela Cossío from the Escuela Técnica Superior de Arquitectura de la Universidad Politécnica de Madrid, we invite you to take a historical urban tour with this article, which was originally collected in the book Palacio Rioja, a recovery experience in Ibero-America.

The territory on which Viña del Mar stands was part of Penco valley, an area that the Town Hall of Santiago distributed between Francisco de Riveros the Elder and Juan Dávalos Jufré, who had gone to the Indies in 1538 and served as the first Corregidor or Mayor of Santiago.

The donation title was notified by the entries in a Doomsday book on 9 October 1556, some 15 years before the foundation of Santiago. Following Riveros’s death, the ownership of Penco Valley was taken over by his son Alonso de Riveros y Figueroa, a man of entrepreneurial character and a penchant for agriculture, who planted a vineyard on the northern margin of the Marga- Marga estuary, between the river and the sea.

This vineyard was later to give the place its definitive name, Viña del Mar, as is recorded in the document of 28 April 1586, in which Dávalos Jufré’s widow sold all of her rights in the region to Riveros for 150 pesos in molten gold.

The vineyard, purchased years later by a member of the Society of Jesus, Nicolás de Lillos, was carefully grown by the Jesuits until they were expelled by order of Charles III in 1767, and the property remained part of the Royal Treasury until 1777, in which year it was purchased at an auction by General Francisco Cortés y Castavía, being variously transferred in subsequent purchases until it finally landed in the hands of the Álvarez family. A modest hamlet started to develop from the 1855 construction of the Valparaíso-Santiago railway, but the true transformation took place when  José  Francisco Vergara y Echevers (1833-1889) and his wife Mercedes Álvarez Pérez, who he had married in 1859, urbanised the lands needed for the construction of the street and the establishment of the squares, the church and the public buildings of the future city Viña del Mar, in accordance with the plan laid out and approved by the authorities of Valparaíso on 29 December 1874. On 31 May 1881, the decree for creation of its municipality was promulgated, at the time the lawyer Aníbal Pinto (1825-1884) was President of the Republic.

The text written by the eminent politician and historian Benjamín Vicuña Mackenna (1831-1886), included in the compilation book created for the celebration of his centennial in 1931, called Crónicas Viñamarinas (1), brings an impressive insight into the location and morphology of this beautiful city, more open to the South Pacific than most others on the continent.

The topographic seat of Viña del Mar, as will have been observed by the seasonal bather and even the mere traveller who traverses it by express train, is moderately surrounded by hills of regular height, mere ramifications of the mountainous system that is adjacent to the whole of our coast, it being that long.

This means that, whenever one goes for a walk or an excursion in search of some variation in appearance and airs—if any can be found that are better than those of the village itself— one will automatically head north, attracted by the small, isolated widening the estuary forms at its mouth.

One’s first sight is that of the sandbank, ever monotonous in its cream colour; but, after a brief walk, one is left facing a true landscape; an English watercolour, elegant and fine in its lines, timid and indecisive in its colouring.

Like meadow fences, there are straight lines of willows from Castile, whose transparent foliage contrasts in a way that is pleasant to the eye with the frank and compact green of the bushy poplar that stands within the vicinity of the hacienda’s farmyards and shelters, located at the centre of the basin.

The winter growths and the estuary filtrations of the summer keep an oblong lagoon full in the vicinity of the beach, resembling a sea inlet when seen from the railway.

Its waters, while slandered as brackish by the neighbourhood, are in fact less salty than they are sweet, for while it is true that it receives a bitter taste from the sea through a narrow sandy belt that serves as its dam, it is likewise that Don Julio Bernstein’s factory discharges its sugary drains into the lagoon: a matter and source of confusion for the geologists of the future when, before an astonished scientific world, they reveal the discovery of an unexpected estuary, an unexpected formation of salt and sugar!

While the city, in its origins, had an important industrial development, with the creation of shipyards, sugar factories and factories for the construction of iron and railway accessories, after 1906 it accentuated its character as a residential and spa town, becoming the preferential resting place for the upper classes the cities of Valparaíso and Santiago. 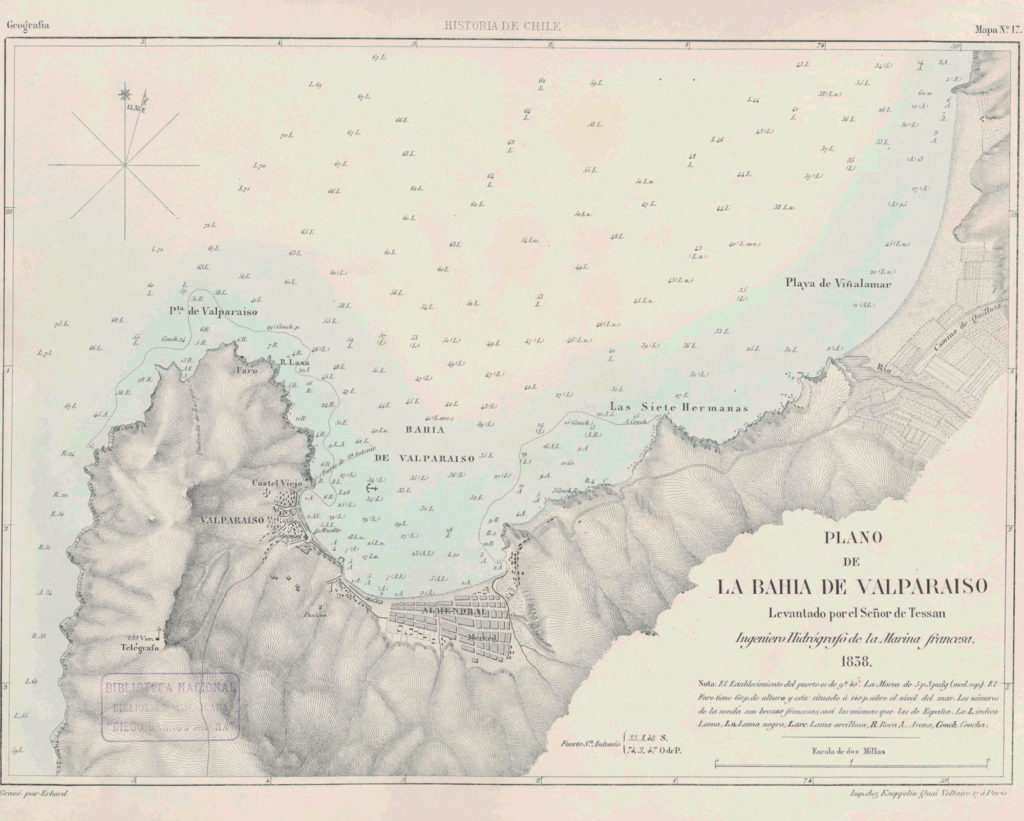 The population of little more than 2,000 it had in 1875 multiplied until reaching 30,000 in 1910, at a time of considerable growth of development, which consolidated the city as a coastal centre until the early 1930s, during which the effects of the Great Depression started to take their toll.

In Brockhaus’s A Short Description of the Republic of Chile, published in Leipzig in 1901, it is already said that “A quarter of an hour’s distance from Valparaiso lies the little town of Viña del Mar, with its 15,000 inhabitants. It is known for its excellent climate, which is so mild that the gardens surrounding the houses and hotels produce the most beautiful flowers the whole year around” (2).

Tornero’s Chile Ilustrado (1872), with its magnificent descriptive guide of the territory of Chile, already insisted on the picturesque condition that many foreigners had given its housings, surrounding them with beautiful gardens (3). 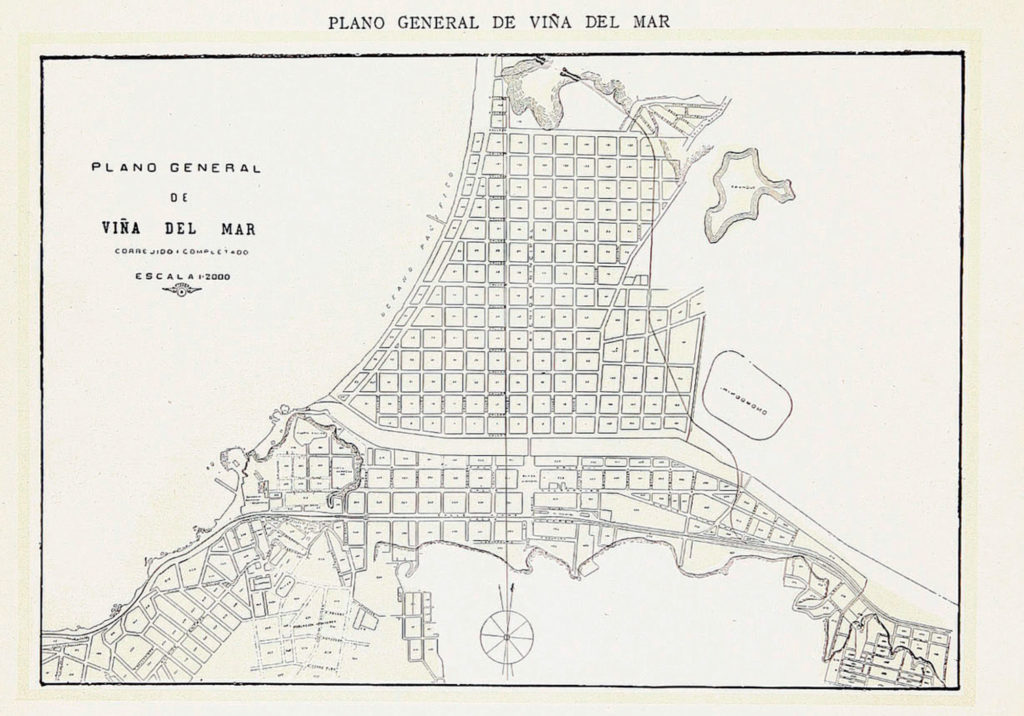 The city in 1924, according to the Diccionario Jeográfico (sic) de Chile: “it stretches along the margins of the lower course of the estuary of that name and occupies a surface of 1.5 km2 south of this estuary and 1 km2 in the north: the latter part is known as the town of Vergara. It contains elegant, comfortable homes, with gardens and orchards,  a few  industrial establishments, including a sugar refinery, etc., and spacious hotels, which fill with people during the summer on account of its mild climate, and is located at an altitude of 7 metres and a distance of 7 kilometres from the station of El Baron, of the city of Valparaiso, to which it is moreover linked by a good path, built on the seaside; it takes its name from the vineyard planted on the north bank of the estuary, the very same denomination being also given to the hacienda comprising these sites, which was crossed by the railway, whose construction began in 1855” (4). 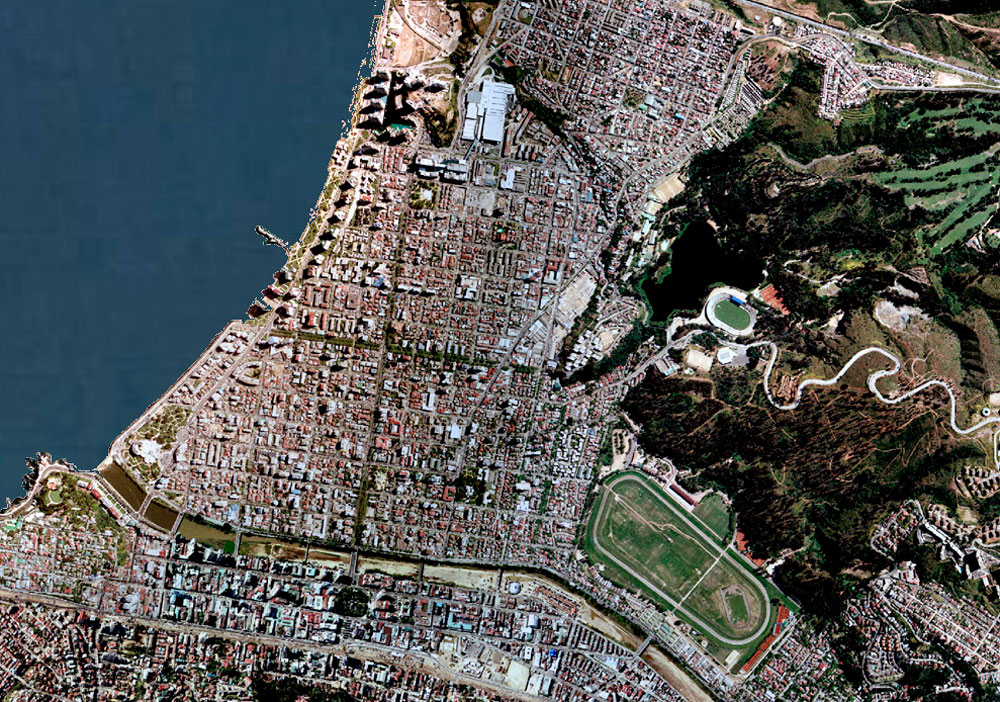 Figure 3. Aerial view of the city of  Viña del Mar.

Nowadays, with its almost 350,000 inhabitants, Viña del Mar is one of the most important holiday and leisure towns in Chile, helped by its proximity to the important port of Valparaíso and to the city of Santiago, from which it lies at a mere 120 kilometres’ distance.

Among the historic buildings that the city has conserved, one must necessarily mention the Palacio  Presidencial de Cerro Castillo (1929), Palacio Carrasco (1912-1923) and Castillo Brunet (1923), all of which are the work of the French-Portuguese engineer and architect Alfredo Azancot (1872-1937), who was trained at the prestigious  École nationale des ponts et chaussées in Paris and lived in Chile from 1895 onwards. Azancot is also responsible for the so-named Arco Británico, which stands in Avenida del Brasil, in the neighbouring Valparaíso, and was donated en 1910 by the residing British colony to commemorate the independence of Chile. The Municipal Theatre, built between 1925 and 1930 under the project of the architects Aquiles Landoff and Renato Schiavon; the imposing PalacioVergara (1910), located in the Quinta of that name and designed by the Italian architects Ettore and Alejandro Petri Santini; and the striking Castillo Wulff (1908), a singular edifice in a French-Germanic style are among the monuments that accompany Palacio Rioja (1907-1910) and have given this historic garden city a marked heritage value. 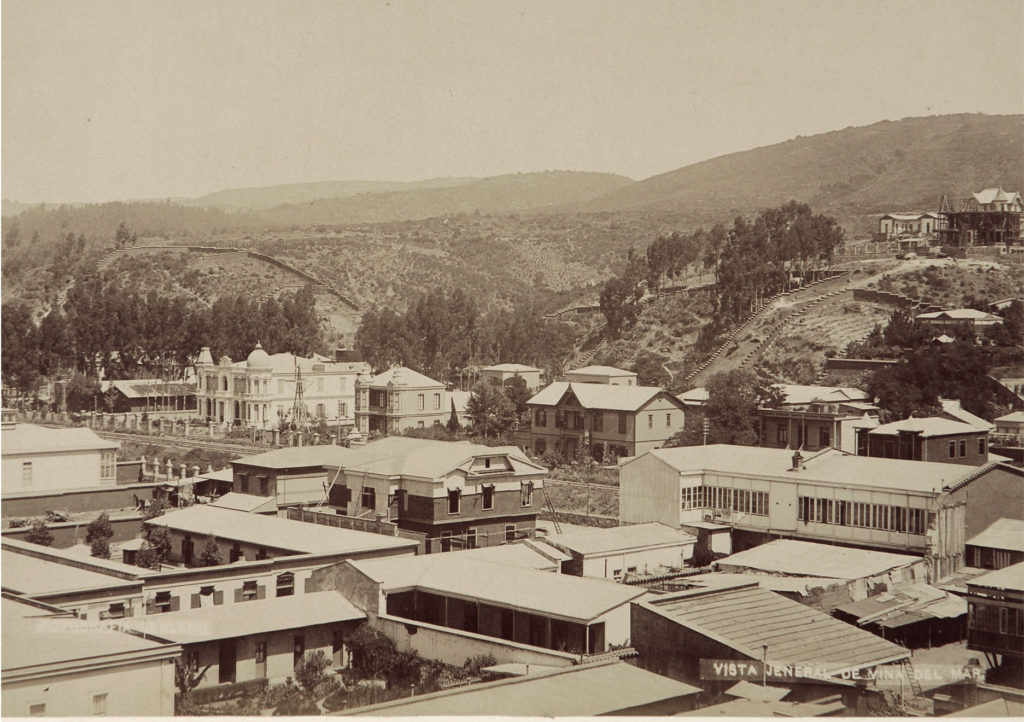 Figure 4. View of the incipient spa of Viña del Mar, with its first constructions, year 1905.

The Municipal Theatre, built between 1925 and 1930 under a project by the architects Aquiles Landoff and Renato Schiavon, the imposing Palacio Vergara (1910), located in the villa of the same name and designed by the Italian architects Ettore and Alejandro Petri Santini, or the striking Wulff Castle (1908), a unique Franco-German style building, are some of the monuments that accompany the Palacio Rioja (1907-1910) and have given a marked heritage character to this historic garden city.