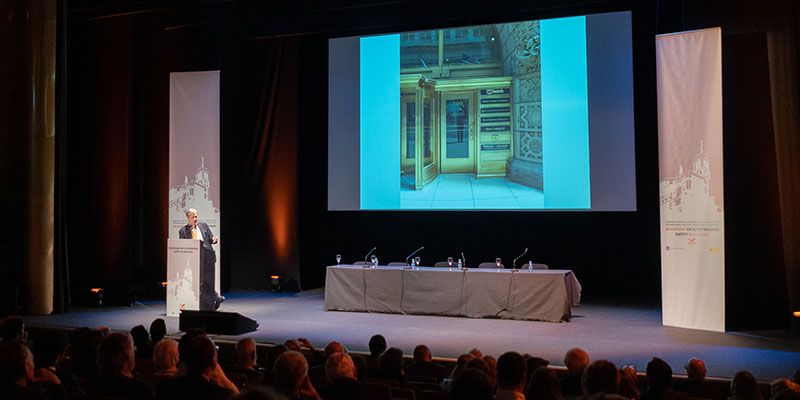 ISS-(II)_Recovering the value of the site by providing safety

The Symposium agenda was structured around three main thematic areas, one per day, which defined the debate and provide a context for the presentations and papers presented each day. All of them had the goal of establishing the criteria for intervention in Cultural Heritage by debating and looking for the best practices for intervening in historic buildings, guaranteeing security and avoiding as far as possible the risk for people, both visitors and maintenance workers, while improving the conservation of cultural property.

The next three publications in this sequence will focus on the specific contents of each day. In this second post we will share the videos of the lectures given during the opening day of the symposium, as well as the interesting debate that took place around the theme of the day and the presentation of the study commissioned by KALAM to the research group LoCUS of the Polytechnic University of Madrid.

This thematic day focused on the definition of the concept of safety, its scope and its complexity when applying it to heritage, as well as the proposed criteria for intervention in heritage that stem from safety requirements.

Defining the concept of security, its scope and the complexity of its application, will lead us to analyse the Criteria for Intervention in Heritage, as well as the good practices that we can contemplate in the most diverse places in the world, where great architects have demonstrated the criteria and sensitivity to achieve it.

The president of this conference was Juan Miguel Hernandez de Leon, President of Círculo de Bellas Artes. In this publication, you will find the videos of the different presentations, communications and debates.

Gunny Harboe is an internationally recognized architect dedicated to the recognition, preservation, and conservation of the world’s cultural heritage. He has over 30 years of experience and currently runs his own small architecture firm in Chicago, Illinois, USA with a focus on historic preservation and sustainable design. He has worked on many iconic modern masterpieces including numerous works by Mies van der Rohe, Frank Lloyd Wright and Louis Sullivan. He was a founding member and is the current President of the ICOMOS International Scientific Committee on 20th Century Heritage, and was a founding member of DOCOMOMO_US where he remains on the board.

Juan Miguel Hernández León is the Chairman of Madrid’s Círculo de Bellas Artes. He graduated in Architecture from the Higher Technical School of Architecture of Madrid in 1974 and holds a PhD in Architecture since 1982 and as Professor of Architectural Composition since 1987. Is currently the coordinator of the Moncloa International Excellence Campus Heritage Cluster. He was the founder editor of the “Pasaje de Arquitectura y Crítica” magazine (awarded the Santiago Amón award for architectural dissemination) and is currently the editor of “Iluminaciones. Revista de arquitectura y Pensamiento”. He is a regular contributor to several specialised Architecture and Art magazines. Member of the Scientific Committee for the Intervention Management Plan at San Pietro in Montorio Church in Rome. As an architect, he is the author of projects like the Recoletos-Prado Special Plan in Madrid (in conjunction with Álvaro Siza), the Museum and restoration of the City Walls in Ceuta, and the Contemporary Art Centre in Vélez-Málaga, among others.

Cannatá & Fernandes was founded in 2000 by Fatima Fernandes and Michele Cannatà. They have been working together since 1984, developing professional activity in Portugal and Italy. Since 1999 are responsible for the scientific coordination of architectural events of Exponor’s “Concreta” event. In 2003 are responsible for the scientific coordination of ASA department of architecture issues. Are since 2004 responsible for the scientific coordination of Civilização department of architecture of editions. Their work and projects have been presented in several solo and group exhibitions, including the Venice Biennale in 1996 and the Milan Triennale in 1997. The firm develops projects in the areas of architecture, urban planning and design, graphic design and engineering services, as well as an important publishing activity with books, exhibitions and international architecture seminars. They have been invited by universities and cultural institutions to present their projects and have participated as professors in several international project seminars.

Paredes Pedrosa Arquitectos. Ángela García de Paredes and Ignacio Pedrosa founded the architectural firm Paredes Pedrosa Arquitectos in 1990. Professors of the Department of Projects of the School of Architecture of Madrid, they are visiting professors and guests, jurors and lecturers in national and international academic and professional contexts of architecture. Their work of intervention in heritage includes projects in the historic building of the Bank of Spain, the Roman Villa La Olmeda, the Library of Ceuta, which incorporates a meriní site, the Torner Space in the Church of San Pablo in Cuenca, the Library of Cordoba that incorporates a caliphal wall, the City of Justice of Jaén that integrates the archaeological site of Marroquíes Bajos and the Visigoth Museum of Mérida that incorporates Roman and caliphal excavations. Receiving prizes such as the Gold Medal for Merit in Fine Arts 2014, the European Prize for Intervention in Heritage 2015 and the Spanish Architecture Prize 2007, or the Biennial of Spanish Architecture 2018 for interventions in the Bank of Spain, among others.

Mario Nanni is an artist of light. For 40 years he has used his experience in the field of lighting and a professional craftsmanship to experiment, design and accompany internationally renowned architects in their work, always providing a particular vision of lighting. He was born in Bizzuno, a small town in Lugo (Ravenna) in 1955. His interest and curiosity for light led him to experiment new forms and methodologies in the projection of lighting bodies, in the continuous search for a single objective: the right light. His reflections led him to find a new source of light, the light of the white pages, understood as emotion and a new starting point for studying the relationship between light and architecture. The synthesis of his experiences culminates in the decision to embark on a great adventure: production. In 1994 Viabizzuno was born as a precise expression of a project philosophy and his passion for light. This passion has led Mario to work with renowned architects such as Kengo Kuma, Peter Zumthor – with whom he illuminated the Therme Vals – or David Chipperfield who ceded all the lighting to Viabizzuno to illuminate the Royal Café and Hotel in London. When it comes to locations, La Scala in Milan and the Venice Biennale have Mario Nanni’s creations every year. At the same time, he teaches at the Ferrara Faculty of Architecture and takes part in various courses, seminars and workshops.

Gaspar Muñoz Cosme is Doctor in Architecture and University Professor of the Department of Architectural Composition of the Universidad Politécnica de Valencia. Director of the Heritage Preservation Programme in Guatemala of the AECID (1993-1997). General Coordinator of the Central American Master’s Degree in Conservation and Management of Heritage for Development, which is taught in Central America. Specialized in the restoration and conservation of architectural heritage and historical centres, he has participated in numerous projects in Spain and Latin America, including the Master Plan of Antigua Guatemala, the restoration of the Convent of San Francisco de Morella, the restoration of the Convent of the Company of Jesus of Antigua Guatemala, the restoration of the Church of San Francisco de Tecpán, the restoration of Temple I and Temple V of Tikal in Guatemala and the rehabilitation project of the Fishermen’s Market of El Cabanyal. He has participated in more than forty research projects since 1990 and is the author of more than one hundred publications. In 2013 he received the Award for Best Practices In Site Preservation from the prestigious Archaeological Institute of America (AIA) in the United States, for his research and conservation work carried out in La Blanca (Guatemala). He is member of the Spanish National Committee of ICOMOS, the Société des Américanistes (France) and the Academia del Partal.

Cristina Vidal Lorenzo is Doctor in Geography and History from the Universidad Complutense de Madrid and University Professor in the Department of Art History at the Universidad de Valencia. Her professional trajectory, both in research and management, has been through pre-Hispanic and Valencian art and archaeology, the conservation of cultural heritage and development actions linked to the enhancement of heritage. Since 1988 she has developed the first of these axes with her participation in the Archaeological Mission of Spain in Mexico, and maintains her link to the study of ancient Mayan culture in various projects in Mexico and Guatemala. In the latter country, she has been developing her main project in this sense since 2004: the La Blanca Project, which has earned her the “Best practices in site conservation” prize, awarded by the Archaeological Institute of America (2013). In recent years she has developed the adaptation of new techniques and technologies for the study, documentation, enhancement and dissemination of heritage. In the Department of History of Art of the University of Valencia she inaugurated in 1996 the teaching line of History of Pre-Columbian Art. She has also taught at various European and American universities and carried out research stays in centres of recognised prestige.

Ricardo Sanz Marcos is Bachelor of Science in Economics and Business Administration, Specialty in Marketing from the Universidad Pontificia Comillas-ICADE and doctorate at the University of Alcalá de Henares with the research “Economic Sustainability of the Cultural Heritage of the Catholic Church in Spain”. Partner and Director since 2003 of the security consultancy PROARPA, based in Spain, which offers independent security services focused on preparation, prevention and intervention to effectively manage risk and provide optimal security. He is a benchmark security advisor to Spain’s Cultural Heritage institutions, managing security projects at museums, cathedrals, archaeological and cultural sites. After the increase of the terrorist threat, he advises on anti-terrorist management to institutions and companies related to Tourism. He belongs to the Cultural Heritage Council of ASIS International and has made the management of Cultural Heritage his leitmotiv.

Javier Alonso Madrid is Architect by ETSAM. He has a PhD in New Technologies Applied to Architecture with the research titled “Parametric Architecture: Methodologies, Strategies and Instruments”. CEO in ATANGA, he is a writer of projects in 14 countries of Housing, Dotacional and Infrastructures mainly, at the moment with work and open projects in Uruguay, Panama, Mexico, Norway, Vietnam and Korea. Expert in BIM Methodology with more than a decade of experience, he is a consultant on this issue in COAM and CSCAE. Member of the BIM national commission of the Ministry of Public Works, as well as of AENOR committees and Spanish representative in the European commission that drafts the ISO international standards on BIM and its translation or transposition in Spain. He is director and professor in several Masters on this subject in Spain. Principal investigator in projects such as 3Dcons funded by the CDTI or HINDCON within the European initiative Horizon 2020.