INSIDE THE RESTORATION OF “HISTORIA DE CONCEPCIÓN” MURAL

Kalam’s team has put in practice the restoration of the mural “Historia de Concepción” made with fresco technique between 1943 and 1946 by the expert of Chilean muralism Gregorio de la Fuente and declared Historic Monument in 2009. 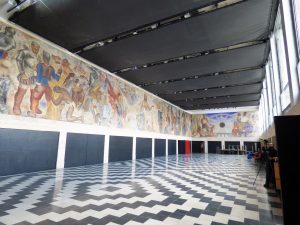 Originally it decorated the lounge destined to the entrance to the platforms of the first-class passengers regarding the State Railway Station, place in which it was maintained until the year 2002 where the period of disuse of the terminal began. In 2007, the building was reopened as the Regional Government of Biobío, consolidating the civic neighborhood of Concepción, after which the piece became part of the Plenary Hall. The following year of the declaration, the strong earthquake of February 27 with epicenter only at 27 km from Concepción occurred, affecting this work and cracking its paintings.

The specialist’s team of Kalam in charge of its conservation, is composed among others, of mural restorers and art historians along with specific profiles such as those of chemist specializing in nanoconsolidants, or documentalist. This intervention includes dry cleaning by controlled air spraying with rubber bulbs, to continue with the desalination and consolidation of the pictorial surface with the Ferroni-Dini method and the use of nanocal spraying, biodeterioration treatment, repairing and levelling of missing parts. Finally, the chromatic reintegration of the work is carried out with the tratteggio technique for its total recovery. 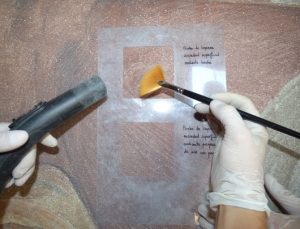 For a better approach to the intricacies of this restoration, we share in this post a complete documentary on the intervention.